Too Big To Fact Check? ‘Not Our Job’ Says AP Editor 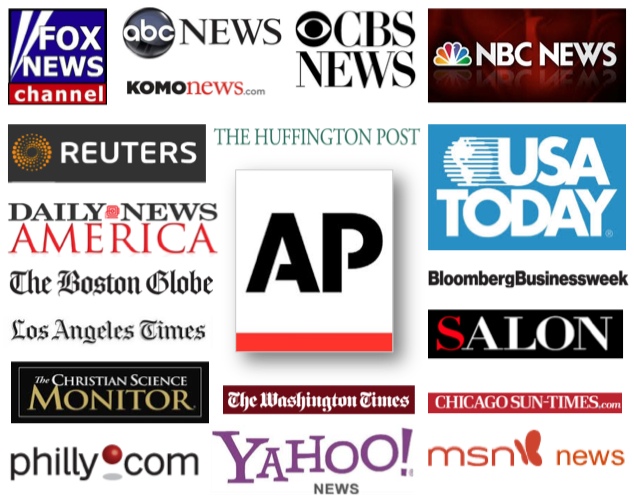 89 mainstream media outlets picked up the AP’s flawed Valley Meat coverage. Of those pictured above, only one (The Christian Science Monitor) responded to public requests for correction.

A series of 18 AP news stories that repeated significant factual errors for a year and a half will not be corrected, according to AP West Editor, Traci Carl.

The articles, which Ms. Carl admits were not fact-checked, followed the attempts of a Roswell, NM, abattoir—Valley Meat—to slaughter horses based on the argument that it would diminish horse abuse and neglect. But there was a problem with that premise, which correlated data showing increasing horse abuse and neglect reported by the GAO (Government Accountability Office) with the closure of the last three domestic horse slaughter plants.

The AP reporter, Jeri Clausing, misreported the closing dates by a year, however, causing the correlation with the GAO data to turn on its head.

Instead of showing that horses suffered abuse and neglect when domestic plants closed, the GAO data instead showed the opposite: that abuse and neglect increased during years in which the plants remained open. But despite being informed of this and other errors, the AP kept repeating them, in most cases, simply cutting and pasting the same false statements—verbatim—into successive articles.

These spread virally across Bloomberg News and Reuters; ABC, CBS, NBC and Fox News; NPR; the Boston Globe, Christian Science Monitor, Huffington Post, Wall Street Journal and USA Today—and hundreds of other mainstream and smaller news providers. As of this date, only one of them—The Christian Science Monitor—has responded to requests to issue a public and formal correction.

The Political Consequences of False Reporting

The false claim that banning slaughter increases horse abuse and neglect was a godsend for Valley Meat and other plants looking to produce horse meat in the U.S. The cumulative audience for that message easily reached into the tens of millions, including lawmakers wrestling with whether to ban or welcome horse slaughter plants into their jurisdictions.

Last year, Oklahoma lawmakers argued erroneously but effectively in overturning a 50-year ban on horse slaughter that it would alleviate horse abuse.

That same argument was used to defeat a proposed New York state horse slaughter ban, while farm bureaus and associations in other states used it to promote opening plants in numerous rural communities.

Is it Possible to Hold the Media Accountable?

The false horse-abuse-and-neglect argument wasn’t the only topic on which the AP—and the mainstream news media—misled the public.

Beginning in June, 2012, more than 60 emails, phone calls and letters were exchanged with Ms. Clausing; News Editor Linda Ashton; Ms. Carl; Standards Editor Thomas Kent; CEO Gary Pruitt; other AP editors and executives; and the AP corrections line. Part of that outreach included a detailed timeline and analysis demonstrating that the 2007 plant closings did not line up with the GAO data.

But neither that nor the accompanying letter co-signed by seven national experts on horses and the horse slaughter industry persuaded the AP to correct or retract its story.

All requests pertaining to the 18 erroneous articles, including notifying news sources that had republished them, were summarily dismissed. This was odd. Making timely corrections and notifying other news sources was consistent with the AP’s mandate (see AP News Values and Principles).

Besides, who could possibly contest a wrong date?

Further, the AP regularly printed corrected versions of articles in which it had misreported data, dates and made minor spelling errors. So why wouldn’t it with regard to a false claim that had actual political consequences?

Dates and Data Are Opinions, Not Facts, Says AP

When asked why the reporter had not fact-checked her sources, Carl stated that the AP’s only duty was to “share the story” that they provided, not check them for accuracy.

She further argued that data was not necessarily factual and that facts in and of themselves weren’t anything more than opinions.

The takeaway was that if a source used false data to promote a falsehood—as Mr. De Los Santos, Blair Dunn and various other supporters had done—that the AP’s only duty, as Carl saw it, was to quote them and then present another source holding an opposite view.

The AP, Ms. Carl said, leaves it up to readers to then “make up their own minds.”

So a false date producing an erroneous correlation with unrelated data is, in the AP’s eyes, an opinion.

When I emailed Ms. Carl the following day, asking why the AP didn’t label its Valley Meat articles “opinion pieces” rather than “news,” she did not respond. She did, however, email me on March 11, 2014, reiterating the AP’s refusal to correct the specific errors I’d brought to the attention of, as it turns out, 34 different people connected with the AP and its mission:

“As we’ve discussed on numerous occasions, the AP has reviewed your criticism and found no reason to correct or clarify our reporting. We have shared your feedback with relevant reporters and editors and it has helped shape our coverage, and we appreciate your passion and dedication to getting the story right.”

One year ago, the AP was excoriated in a Huffington Post article (“We Deserved ‘Shellacking’ For Boston Marathon Misreporting”) for errors provided by a source that the AP admitted to not fact checking. It accepted responsibility and fell on its sword.

Is another shellacking in order for the AP–and the rest of the news media—for misleading the public about Valley Meat?

More to the point, if a journalist and six national experts can’t get a news organization of the AP’s stature to report factually on issues that brought this country closer than it has been in seven years to opening horse slaughter houses; if the press won’t fact check when reporting on subjects that have political consequences—then what hope is there for the news media, and the public who relies on it so heavily?

I’ve submitted this story now to  The Nation, Mother Jones, Salon and the Huffington Post—a publication that will let you publish nearly anything. The first three didn’t respond to my queries, and the fourth got back to me with a polite “no thanks.”

No one, apparently, wants to criticize the world’s largest news gathering agency. As Mark Twain famously said, “Never pick a fight with people who buy ink by the barrel.” Which makes me ask:

Doesn’t This Bother Anyone?

If the lack of media accountability bothers you, do this: tweet this article to every mainstream news source that got this story wrong (you can also follow me on Twitter @viglet). And the next time you see an error from any news organization, demand corrections. Politely contact the reporter, their editor, their corrections department, their standards editor and if necessary, their editorial board and CEO—and don’t give up until they do something.

Lord knows, the nation’s journalists work hard and do tremendous good; but their errors and disinformation are indistinguishable from the truth—and the public pays dearly for it.

Filed under Animal Journalism, From my blog on Forbes.com.