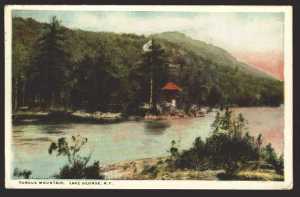 The wild turkey walked down the slope behind our house this morning, right up to the kitchen windows, and peered in. I first noted him while lying in bed, staring out the back window of our camp on Tongue Mountain from the second floor, warm under an ancient wool blanket and wondering what I might glimpse in the woods at that hour. I was looking for signs of wildlife and the turkey appeared to be doing the same.

I’d been rewarded on the Fourth of July with a glimpse of my first bald eagle flying past our front porch overlooking Lake George. Bald eagles had built a nest in Deer Leap further north of our place on Tongue Mountain point, I’d been told years earlier. But I had yet to see one. I’d heard, too, of a return of bob cats and even mountain lions. I wanted to see those, as well as moose, of which there had been several sightings.

Strangely, I’d discovered that Tongue Mountain was a favorite of deer hunters, without ever once seeing a deer at camp. Raccoons fed off the corn cobs we tossed under the trees; chipmunks, squirrels, muskrats; crows, seagulls, swallows, and hummingbirds.

I’d seen my first bear cub in the fall—all critters you could see in the suburbs near New York City, where I live. But there was something different about seeing them here.

Here, there are no roads. There is occasional boat traffic. There are a few other camps like ours, but where our property ends, and it does not extend far, the land is forever wild.

I don’t know what my great grandfather had in mind when he bought this place and built our cottage in 1904. Photographs from that time show the mountain was nothing but stumps, the lake brown from run-off caused by over logging. Somehow, he envisioned an escape from the paint and varnish business. He’d founded the Brooklyn Paint and Varnish Company; traveled the West, collecting rugs and objects from Indian reservations and somehow found this property, bought it, and built the camp. He named it Tongue Eyrie.

The materials were hauled across the frozen lake in winter by a team of horses. The furnishings came from a Sears catalogue and his guests, judging by photos, were mostly chorus girls. He built a small cottage off to the side for his servants, Max and Emma. He brought over a piano, long since gone.

Two weeks ago, I swam the small bay next to our dock. I went to check out what looked to be a muskrat swimming in the water, but was really just a fallen tree sticking out of the water, and examined a large rock with six map turtles sunning themselves. I met three mergansers that had stopped by the island where my great-grandfather built a gazebo and, to access it, a small stone arched footbridge that had since fallen into the water and had been reformed by tree roots into a natural bridge between the island and the shore.

As I sat high on the rocks, I noticed two kayakers in the bay and asked them, when they were close to shore, to not disturb the turtles. They said they were only in the bay, picking up garbage blown or tossed overboard by boaters who anchor there on hot summer days. I invited them up for a visit. What I heard during our hour-long conversation cheered me.

They’d been camping on Lake George for decades, and traveled the U.S. as well. The waters of Lake George, they said, were unsurpassed in terms of clarity. You could see the rocks deep down, but in other noted lakes, you couldn’t see the bottom. There was too much sediment in the water, or invasive plant growth, or species like Zebra mussels.

They went on to tell me of watching a rattlesnake eating a chipmunk on a recent hike. The subject of rattlers always came up when discussing Tongue Mountain. The dens were down the mountain from our house and I’d seen maybe 15 in my life, mostly on the path to the house, in several woodpiles, and one under our gazebo (and long since removed by a local biologist), just feet from where I sunned on the rocks with guests and small children.

I’d since, though, stopped being afraid of them, as I had been of the many spiders that lived in our house. I knew they were doing their part; the spiders ate the mosquitos and other bugs. The snakes ate the mice.

My two visitors who arrived by kayak told me  of a hiker that had recently been reported for shooting rattlers he found along the Tongue Mountain trail—using a revolver.

Isn’t the purpose of forever wild to walk softly, at most to carry a stick—and nothing but a stick? Frankly, I prefer a rattler than that alternative. 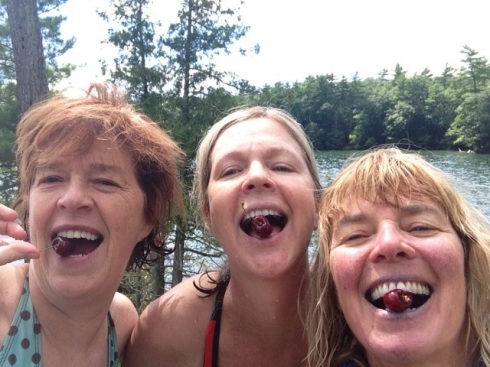