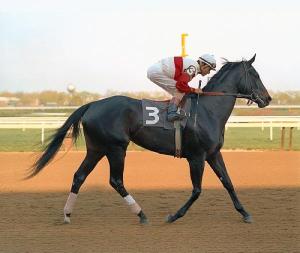 I used to love horse racing. I grew up with horses, did Pony Club, mucked out stalls with a pair of rubber gloves and bucket and dreamed about horses, horse shows, horse anything. I even went to college in Saratoga.

Then, the summer before my freshman year, the unthinkable happened: Ruffian broke both sesamoid bones in her foreleg racing Kentucky Derby winner, Foolish Pleasure, at Belmont Park.

I remember the race, the day, the sight of Jacinto Vasquez trying to pull her up as she galloped on her pulverized leg and later, the news she’d come out of surgery only to smash her cast while thrashing in her stall.  The news she was gone was unfathomable. An estimated 20 million people watched the race. I can’t imagine that anyone wasn’t affected.

Ruffian was the second horse I’d love, but the first I’d lose. She had every gift in life, but length of years, as the late Ted Kennedy would say in his eulogy for JFK Jr. Ruffian, the hope of horses and of one college-bound, horse-obsessed girl, was no more.

College in Saratoga was grand. I lived off campus my last two years in a Victorian townhouse at 176 Regent Street and dated a bartender at the famed racing hangout, Siro’s. We went to the track a lot. It was exciting and then, I saw another horse break down. Not a big horse, not a famous one. An anonymous one.

It lay on the track as the crowd watched a van drive up, erect a screen, and then, minutes later, drive away.

I went home and never returned. Yes, I return to Saratoga. I have had family there for many years. I may enjoy the excitement around the Travers, but I will not go. My heart is with the horses, and my money stays in my pocket. It’s the one form of protest I have as a horse lover and humanitarian, and I cherish it.

This past year, when I learned about the connections between horse slaughter and horse racing, I resolved to share it as widely as I could. It surprised me that so many people didn’t know. Yes, they knew about Barbaro, a few knew about Eight Belles and Go For Wand and Lauren’s Charm and a few others. But strangely, they just shrugged it off. “What do you want me to do about it?” their expressions would say. “It goes with the sport.”

I’ve made a bit of a career, recently, in being critical of it. This pisses off a lot of people. The ones who feel defensive about supporting racing like to tell me I don’t understand it or that progress is being made in racehorse retirement or whatever. I tell them about my years in Saratoga, but that’s not what they care about. What they care about is not examining themselves.

I have done that with regard to racing and while I will always love the horses, here’s what I’m requiring of myself these days: I don’t  give my money, my time and my support to anyone or anything that exploits them. That includes watching HBO’s “Luck.”

There is a point at which people get so used to seeing horses break their legs and get euthanized that they start finding it acceptable. Me? I started watching slaughter videos. I can watch them because I’m not subsidizing it. But horse racing? It’s a different kind of watching.

Ruffian’s breakdown and death led to a public outcry for more humane treatment of racehorses. That was 37 years ago.

That is what my post today on Forbes.com, Horse Deaths Won’t Stop Production of “Luck” is about. Two horses died during the production of two episodes of HBO’s series on the underbelly of horse racing.

Ruffian, I still think of you. Someday, this will be over.

For more on this topic, visit my personal blog, follow me on Twitter and on Forbes.com, including these posts:

How Many Congressmen Does It Take To Screw A Horse?

Is Your K-Y Jelly Cruelty Free? Do You Care?

Filed under From my blog on Forbes.com.

← Is Your K-Y Jelly Cruelty-Free? Do You Care?
What A Seventh-Grader Taught Me About Wild Horses →