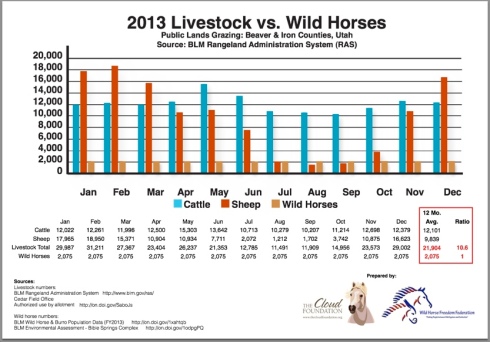 The facts are in: There are 10.6 times as many livestock as wild horses grazing public range lands in Utah’s Iron and Beaver Counties.

For anyone following the news about ranchers looking to round up 697 wild horses there on the taxpayers’ nickel, this is an auspicious (and overdue) piece of BLM (Bureau of Land Management) data. For everyone else, pay attention: that 10:6 to 1 ratio is significant to you as a U.S. taxpayer and citizen—and my latest article on AlterNet (“Ranchers Want Our Public Lands for Their Livestock, and Want the Govt. to Stick It to Wild Horses and Taxpayers”) explains why.

What’s auspicious about the figure of 10.6 to 1? Everything.

The story behind the story

The wild horse issue is a numbers story shaped by two taxpayer-supported federal programs: the BLM’s Wild Horses and Burros Program and the Federal Grazing program. Together, these two programs are responsible for the overgrazing by privately owned livestock of 245 million acres of public land. These programs are also responsible for the simultaneous blaming (and removal) of thousands of wild horses protected by an act of Congress. Both programs are huge money drains for U.S. taxpayers that exist to aid a declining population of ranchers in ten western states supplying two percent of the nation’s beef supply.

It’s a common misperception that the programs are justified because of what ranching contributes to western state economies. According to Western Watersheds founder Jon Marvel, however, these ranchers’ economic contributions are miniscule, both at the state level and within their own communities. In other words, neither program is justified on economic grounds. Neither are they justified on the basis of the ratios of cattle and sheep to wild horses and burros (which varies from area to area), nor on the basis of protecting wild horses, nor the range lands themselves.

The story I want to tell you here, however, is how I got that 10.6 ratio, and all the supporting BLM data that backs it up.

First of all, the BLM did not supply it. I asked BLM officials for it three weeks ago (Meghan Crandall, Lisa Reid and Elizabeth Burghard) and was stonewalled.

This explains how the media has so far put out story after story about wild horses overpopulating public lands—because this is the official BLM and rancher story and no data has so far existed to disprove it.

When the news therefore started breaking about Utah ranchers threatening to round up “overpopulating” wild horses unless the BLM did the job, I reached out to local reporters with a single question: “How many cattle and sheep are grazing those lands by comparison”?

Only one reporter got back to me. He said he’d asked the BLM, but not gotten an answer.

So I picked up the phone and called the BLM’s Cedar City Office.

Over the next few days, I contacted four different people, two of them in public and external affairs. These are the government folks that media people like me always get sent to when we come calling for information. It’s their stated job to guide the media—which generally means they supply what they want you to report on, not what you ask for.

Reporters, being hard-working people without the time or resources to go after data while on deadline, use what they can get their hands on. That set-up does not lend itself to factual, data-driven reporting on the wild horse issue, unsurprisingly.

I was told to email my questions to the BLM, and I did so. I asked for several bits of data: how many livestock in Iron and Beaver Counties vs. wild horses? How much does it cost to round up wild horses (per head), what method will be used, and who will pay the BLM’s bill (Utah or federal taxpayers)?

I asked these questions three weeks ago.

A week later, I was told by the BLM’s external affairs person, “we have pulled your numbers, but need to get them approved by our DC office.”

I’ve heard nothing since.

So I went looking elsewhere for data and found two groups willing to supply it. They actually mined the BLM’s Rangeland Administration System (RAS)to its depths —no easy task, but doable with a lot of patience and attention to detail. They examined every grazing allotment, every grazing permit holder, how many sheep and cattle they grazed, and on what rotation schedule for all the allotments overlapping herd management areas from which the wild horses were being targeted for removal in Iron and Beaver counties.

Their complete analysis is far deeper than anything I could fit into an article without overloading people with numbers. But these numbers demand to be looked at. They demand that similar numbers be provided for every area where the BLM is planning on rounding up wild horses for the coming months (and year) on the justification that “there’s an overpopulation of wild horses.”

Seen in light of how many cattle and sheep are out there, this story is provably false.

Please check out the data at The Cloud Foundation and Wild Horse Freedom Federation sites (link tk) and keep checking back as more BLM round ups are planned, to see what those plans will do to the already outsized ratios of livestock outgrazing wild horses on public lands.

The BLM may not be willing to inform the public and the media about how government spends its tax dollars, but there are, fortunately, grassroots groups dedicated to providing that information.

If you know of a reporter or media outlet that are putting out a false “wild horse overpopulation story,” please educate them. Give them a link to the AlterNet story or provide them more detailed data available through the Cloud Foundation and Wild Horse Freedom Federation sites.

And for more on this topic, please follow me on this blog and @viglet on Twitter or read my articles on Forbes.com.